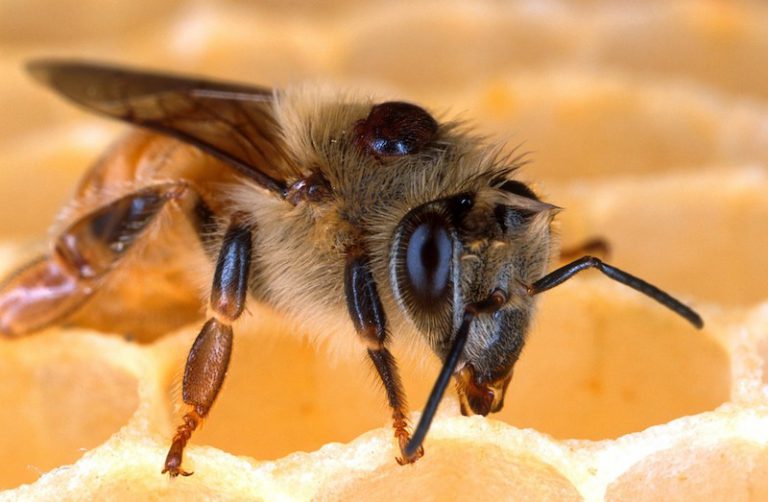 Also called « the bees’ vampire », the varroa is a true disrupter of any beekeeper’s schedule and apiary. Varroa’s invasion are very difficult to contain and most of the time will infect all the colonies and very quickly too.

A varroa is first discovered in 1904 by Jacobson in the Java Islands, on apis crane bees. But it is not until the 1960s, in Siberia, that a link is establish between the varroa and the colony getting weaker.
Soon, thanks to human travelling and commodities, the pathology quickly spread around the world. In many countries, the varroa is considered the most serious disease known today a bee can have, and have caused the death of tens of thousands of bees.

Although small, the varroa can be seen by the bare eye measuring between 0,04 to 0,6 inch, the female are brown and male are white. The varroa is also very agile and can stick to bees’ or larvae’s backs with their suction cups at the end of each of their eight legs.
The varroa follows the bees natural cycle of life, meaning that, at the beginning of the summer, the number of bee, larvae and varroa will very significantly increase and inversely by the end of the summer.

The devastating effects on the colonies

The varroa, by sucking the larvas’ and bees’ blood, weaken them and thereby weakens the entire colony. For instance, the lack of blood and thus proteins, weakens the nanny bees which in turn affects the larvae’s development and make them more expose to varroa, and there goes the vicious circle. Besides, when sucking blood and weakening bees, the varroa expose its victim to different viruses and bacterial infections that can lead to to paralysis or deformed wings for example. The varroa is spread to the other colony through environmental and climate conditions, pillage and swarming. It spreads to different apiary mostly through humain and the use of the same tools between infected and non affected colonies.
Several techniques have been developed to control and stop varroa infections, we will cover those techniques in our next article.